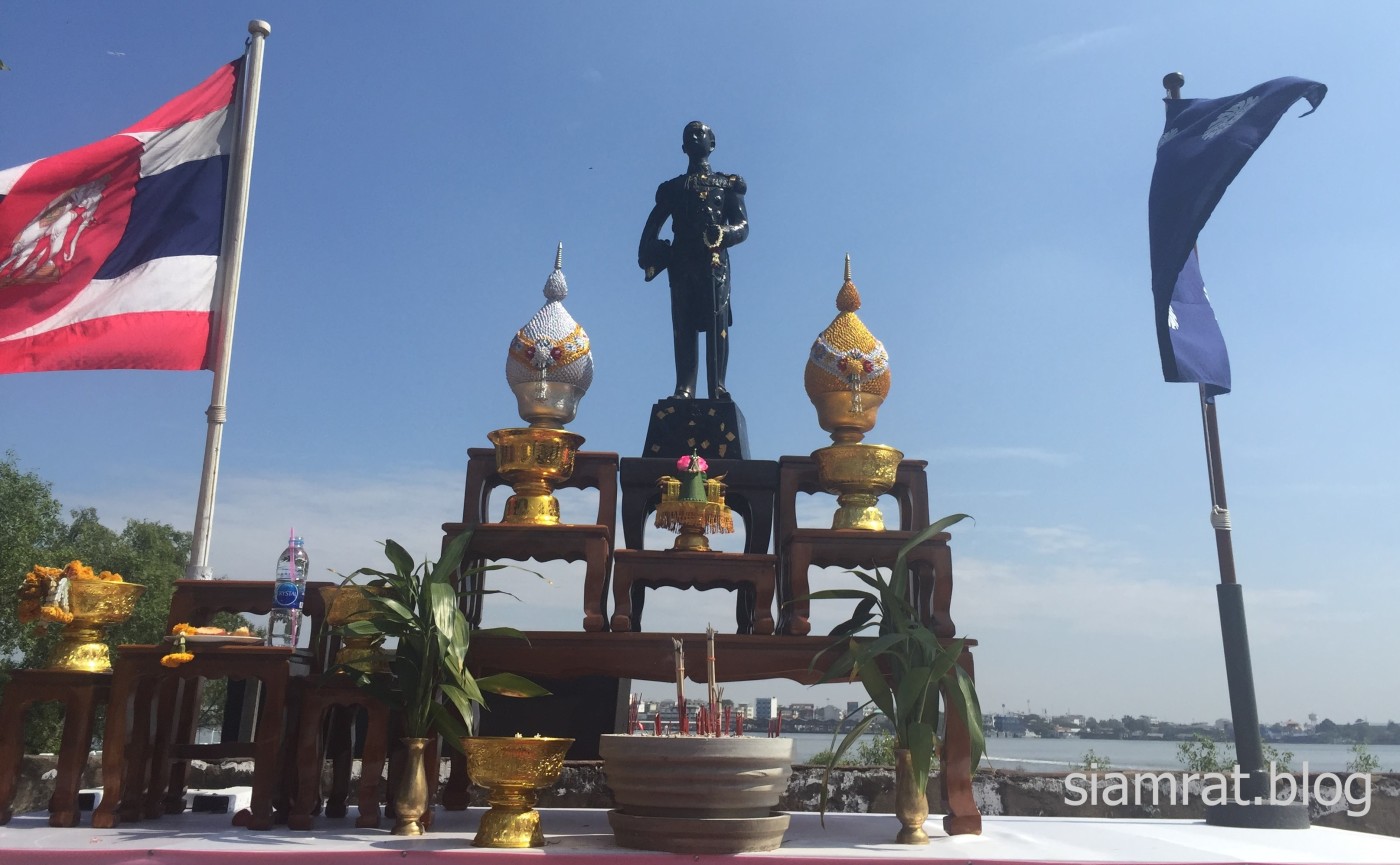 Anybody who takes an interest in Thai history will soon hear the phrase “He is today considered the Father of Thai……..” where the blank might be anything from “Navy” or “Postal System” to “Art” or even “History”. After a while one realises that there are many of these “fathers” some of whom are mentioned in the Thai school curriculum and hence learnt by heart by all Thais. So here is a brief selection of these “fathers” and how they achieved this fame.

King Bhumipol (Rama IX) was famous for his active interest in agricultural water management promoting techniques such as cloud seeding to promote increased rainfall, water retention “monkey’cheeks” to manage flood waters and water aerators to improve water quality. His “Chaipattana Aerator, Model RX-2”, a motorised floating paddle-wheel used to aerate water, received a patent in February 1993 making King Bhumipol the only reigning monarch to be granted a patent. He received a second patent in 2001 for an updated model RX 5C.

On 21st November 2006 Thailand’s cabinet approved a proposal from Thailand’s National Research Council to present King Bhumipol with the title “Father of Thai Invention.” As far as Siam Rat is aware this is the only time such a title has been officially bestowed upon a recipient and appears to formalise what until then had been an informal process of recognition.

Corrado Feroci was a student of the Royal Art Academy of Florence  who lived in Thailand from 1923 until his death aged 69 in 1962. He became a Thai citizen during the Second World War to avoid internment by the Japanese when he took the name Silpa Bhirasri . He was responsible for some of Thailand’s most well known monuments including Victory Monument (1941), the reliefs on Democracy Monument (1939), King Rama I statue in front of Memorial Bridge (1929), King Rama VI statue in front of Lumphini Park (1941) and the statue of Thao Suranari in Korat city centre (1934).

In 1932 Bhirasri opened Thailand’s first School of Arts which in 1943 was upgraded to University status becoming Silpakorn University. Although criticised in some quarters for being conservative in his artistic style he is remembered in Thailand for the influence he had on public art and sculpture. He is therefore known to Thais as “The Father of Modern Art“.

Prince Purachatra Jayakorn was born in 1881, the 35th son of King Chulalongkorn (Rama V). He spent ten years being educated in England, including studying at the School of Engineering at Trinity College, Cambridge. On returning to Siam in 1904 he applied his engineering knowledge to the various challenges being undertaken by his father at that time in building modern infrastructure for the nation. Initially he worked at the Siamese Department of Engineering but in 1910 took over responsibility for the Northern Railway Department. In July 1917 he was appointed Commissioner General of the newly formed Railways Department. Under his administration the Northern and Southern railways were extended and the North-Eastern and Eastern railways constructed. One of his most notable achievements was the construction of Rama VI bridge, the first bridge to span the Chao Phraya river in Bangkok, which allowed the Southern Railway line to be interconnected with the rest of the national rail network. For his contributions to the development of Thailand’s railways he is remembered as the”Father of Thai Railways”.

But Purachatra’s interests in engineering were wide and in 1930 he set up a small radio station in Phayathai Palace and pioneered the nation’s first radio broadcasts. His plans to introduce experimental television to the Kingdom were interrupted by the People Party’s coup in 1932. Nevertheless this pioneering work earned him the title of”Father of Thai Radio“.

Prince Damrong Rajanubhab was born in 1862, the 57th child of King Mongkut (Rama IV). At an early age he began working in the new government administration being established by his elder half-brother King Chulalongkorn (Rama V). Apart from King Chulalongkorn himself Prince Damrong became probably the most influential person in the task of modernising Siam.

At the age of eighteen Damrong was appointed Commander of the Royal Guards and just seven years later became the Commander in Chief of the Army. During these times he helped in the introduction of innovations to modernise the Siamese military.

In 1887 Damrong was also appointed as the head of the new Department of Education. In this role he established a modern system of Primary and Secondary schools across Siam with a standardised curriculum. It was for this work that Prince Damrong is remembered as “The Father of Thai Education”.

Prince Damrong went on to head the Ministry of the Interior for twenty three years where he oversaw the establishment of Siam’s modern administration.

After retiring from the government in 1915 he devoted his time to studying Siam’s history and culture, having unique access to Siam’s royal chronicles. He published about eighty books and papers, one of the most famous being his book “Our War with the Burmese” (Thai Rop Phama) published in 1917. His writings on Thailand’s history are to this day the basis of the history taught in Thai schools. He is thus also remembered as “The Father of Thai History“.

Prince Mahidol Adulyadej was born on New Years day 1892, the 69th child of King Chulalongkorn (Rama V). He underwent a naval education in pre-World War I Germany but on returning to Siam on the outbreak of war fell into conflict with his naval peers. He resigned from the Siamese navy but was encouraged by his half-brother Prince Rangsit to help instead with the Siam’s nascent public health system.

Thus in 1916 he enrolled at the Harvard-MIT School For Health Officers in Cambridge, Massachussets (Now known as the Harvard School of Public Health). After graduating in 1921 he went on to study to become a Medical Doctor at Harvard Medical School, qualifying in 1927. Famously unassuming he preferred to be known to his friends overseas as “Mr Songkhla” rather than by his royal titles.

Between his studies in America and his own medical treatment and recuperation in Europe, Prince Mahidol worked and taught at Siriraj Hospital, Siam’s first hospital established in 1888 by King Chulalongkorn. He made various endowments to the hospital to provide additional land and buildings as well as supporting new scholarships.

During this period the young Prince also courted and married a nursing student, Miss Sangwal Talabhat, sent from Siam to study in the USA. Over the next few years they had three children whose places of birth mapped the young couple’s travels; their daughter Galyani was born in London, their first son Ananda was born in Heidelberg, whilst their second son Bhumipol was born in Cambridge, USA.

On completing his studies at Harvard Prince Mahidol returned to Siam at the end of 1928. In April the following year he took up up residence in Chiang Mai to practice as an intern at McCormick Hospital. However he was suffering from recurring kidney related health problems and after just three weeks he returned to Bangkok where his health continued to deteriorate. He died on 24th September 1929.

After his death Prince Mahidol was propelled into the history books in a way he would never have expected. In 1932 a military coup led by the People’s Party ended the Absolute Monarchy and three years later the reigning king, Mahidol’s half-brother, Prajadhipok (Rama VII), abdicated. Prajadhipok had no children so the People’s Party scanned the royal family for a suitable candidate, landing upon the young Prince Ananda, first son of Mahidol, to become the next king, Rama VIII. In 1946 the young King was shot dead in mysterious circumstances and was succeeded by the even younger Bhumipol, becoming Rama IX. Thus contrary to all expectations Prince Mahidol became the father of two kings of Thailand. But Prince Mahidol is still remembered for his contributions to Thailand’s health services with a statue in front of Siriraj Hospital in his honour and the title “The Father of Modern Thai Medicine” .

Prince Abhakara Kiartivongse, better known by his title Prince of Chumphon, was born in 1880, the 28th child of King Chulalongkorn. Like many of his royal siblings he was schooled in Europe, studying Naval Science in England. On returning to Siam Prince Chumphon sought to modernise the Royal Siam Navy. In 1922 he procured land in Sattahip Bay on which was established the naval base still in use today. As Admiral H.R.H. Prince Abhakara he also helped draw up plans for modernising Siam’s navy over a fifteen year period. This plan included the purchasing of new warships. One of these, Phra Ruang, the Prince personally negotiated the purchase of in England before commanding the ship on its journey to Siam.

Prince Chumphon ended his career as Minister of the Navy, that is the commander in chief, but died at an early age on 19th May 1923. Seventy years later the Royal Thai Navy officially recognised 19th May as “Abhakara Day” to remember the Prince who was “Father of the Thai Navy“.

The above list of “Fathers” is not exhaustive. Others that Siam Rat has come across are;

What the majority of these “Fathers” have in common is that they are either siblings or off-spring of King Chulalongkorn. This reflects the extensive national modernisation program that King Chulalongkorn instigated from about 1880 and the extent to which top administrative positions were concentrated in the hands of the royal family during that time. What is also noticeable is that no women are remembered in a similar manner despite note worthy achievements by some women in this period against all odds – consider Thanpuying  Plien Pasakornravongs  who established the fore-runner of the Thai Red Cross in 1893, or even Queen Saowapha who promoted girl’s education despite her husband’s active discouragement.

Finally, if any readers know of other such “Fathers” of Thailand’s development do drop Siam Rat a line so that we can expand the list.

This article was updated 27th April 2019 to add more “Fathers” in the above list.