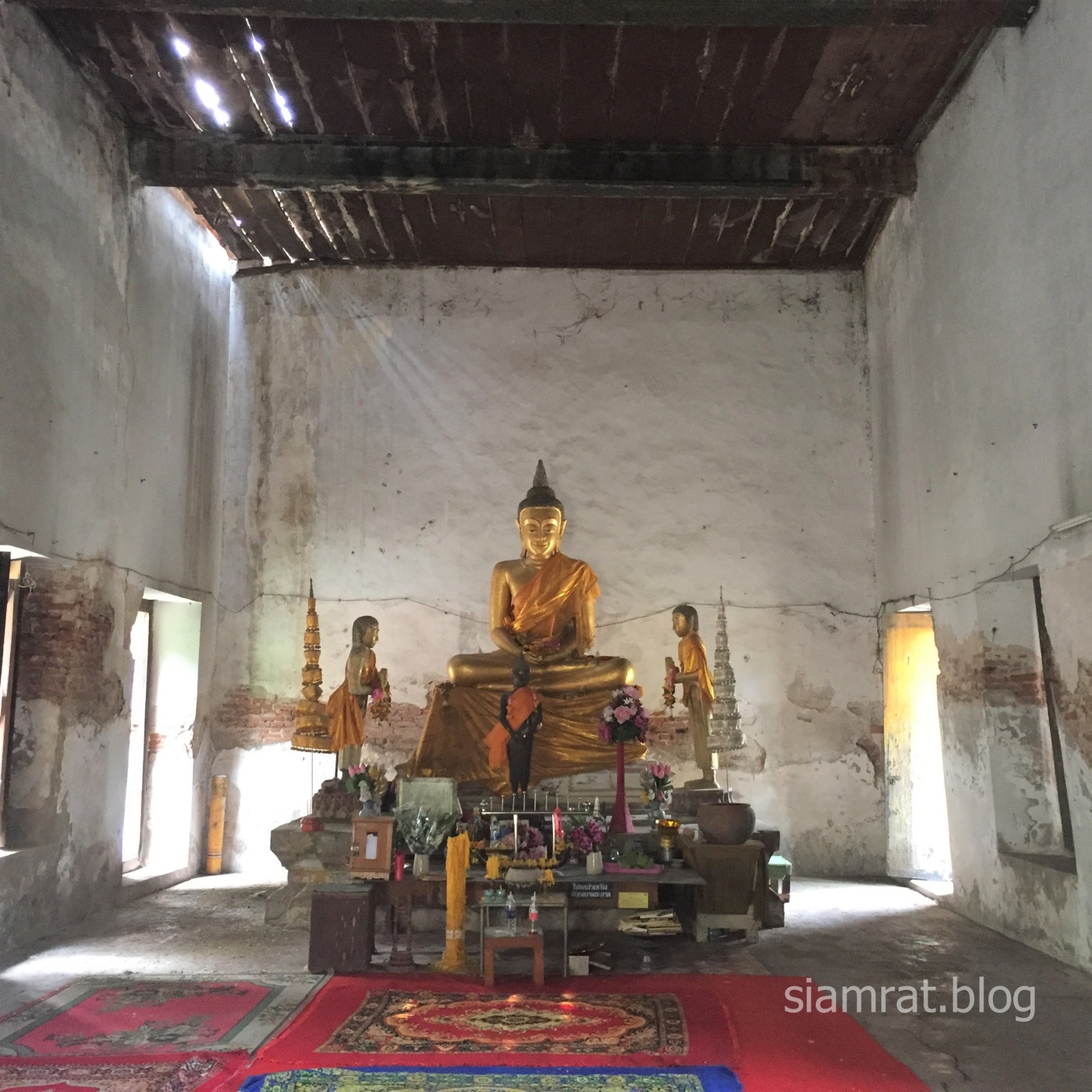 For those wanting to get away from Bangkok at the weekend there is perhaps no nearer escape than Phra Pradaeng, the huge green oasis almost in the heart of the city but separated from it by a 17km long loop in the Chao Phraya River. Riding around this island on a rented bicycle is a great way to spend a day out. And for Siamrat one of the hidden treasures of Phra Pradaeng island is a pair of old temple buildings at Wat Bang Nam Phueng Nok.

Wat Bang Nam Phueng Nok (“Outer Honey Village Temple”) itself is a large temple on the eastern bank of Phra Pradaeng where the ferry crosses from Bang Na. A temple has been situated on this site for at least 350 years, well before Bangkok was the capital city. The current temple building however dates from the 1960’s, being inaugurated by Queen Rambai Barni, previously queen to King Rama VII, in 1966.

On walking some 250m further up the road however, one finds on the left hand side by the school two very old and very dilapidated temple buildings, one an ubosot (Ordination Hall) and the other a viharn (Assembly Hall). These buildings are home to some splendid but deteriorated artwork.

The ubosot building is the larger of the two buildings and in a serious state of disrepair. Plaster is crumbing from the walls exposing the brickwork behind. Sunlight pierces through the broken tiled double roof and the fragile wooden ceiling to illuminate the interior with evocative rays. But no doubt on a rainy day it is a very different spectacle. If there were ever any murals on the walls all evidence of them has been lost to moisture over the years. However some exquisite paintings of traditional protective guardians known as “tawaraban” have survived on the wooden window shutters.

The local community still maintain the ubosot as a place of worship and meditation, the interior being kept clean and with a rather beautiful set of Buddha images set up at the western end.

The viharn building has a single roof and stucco work on the gable ends with a garuda image in the centre. Overall it is in no better physical condition than the ubosot. Inside the western end of the room has a raised platform on which a multitude of small buddha images surround two main images. Of great interest in this building are the surviving murals of classic Buddhist jataka tales that tell the stories of the Buddha’s many past lives.

On the back wall is a mural of the Chulamani Chedi which according to Buddhist legend holds a relic of the Buddha in Tavatimsa heaven. The god Indra painted in green can be seen with other deities paying their respects to the Lord Buddha.

On the side walls only the upper murals have survived, probably because of creeping moisture lower down in the walls. But these upper murals show rows of exquisitely drawn deities.

Above the viharn entrance one can still make out the very popular scene of “Calling the Earth Goddess to Witness” in which the Lord Buddha on the point of enlightenment summons Phra Mae Thorani from the earth to defeat the evil forces of Mara by wringing a flood of water from her hair.

The artistic quality of these murals is clearly very high and consistent in style with early Bangkok court styles. However the artist has left no indication as to their name or even who sponsored the building and decorating of the temple. Even the year of construction is unknown. There are however some clues.

The brick and stucco construction techniques are of Chinese design in a style that became popular in the reigns of Rama II (1809 – 1824) and Rama III (1824 – 1851). Furthermore the doors in the ubosot are rather unusual because in place of traditional tawaraban guardians they are decorated with paintings of chinaware (Vases, bowls, teapots) that was fashionable during the reign of King Rama III.

However the most compelling evidence for both the age and sponsorship of these buildings is to be found in the mural on the rear wall of the viharn. In the top left and right corners can be seen two empty “vimarns”, or celestial palaces, floating in the clouds surrounded by deities. This vimarn symbol was the privy seal of King Rama III and would certainly date this artwork to his reign, 1824 – 1851, and would suggest there was sponsorship from the royal court.

So it would appear that this small temple has links back to King Rama III and the quality of the art work suggests that the artist(s) may have also come from royal court circles.

In late 2016 a pair of steel roofs on scaffolding were erected over the uobost and viharn to protect them from the weather. Siamrat is not aware of what further restoration is planned but clearly much more needs to be done to prevent further deterioration of the buildings and the artwork within. One hopes that any work is carried out carefully and sympathetically to the history of these beautiful temple buildings. They are well worth a visit.