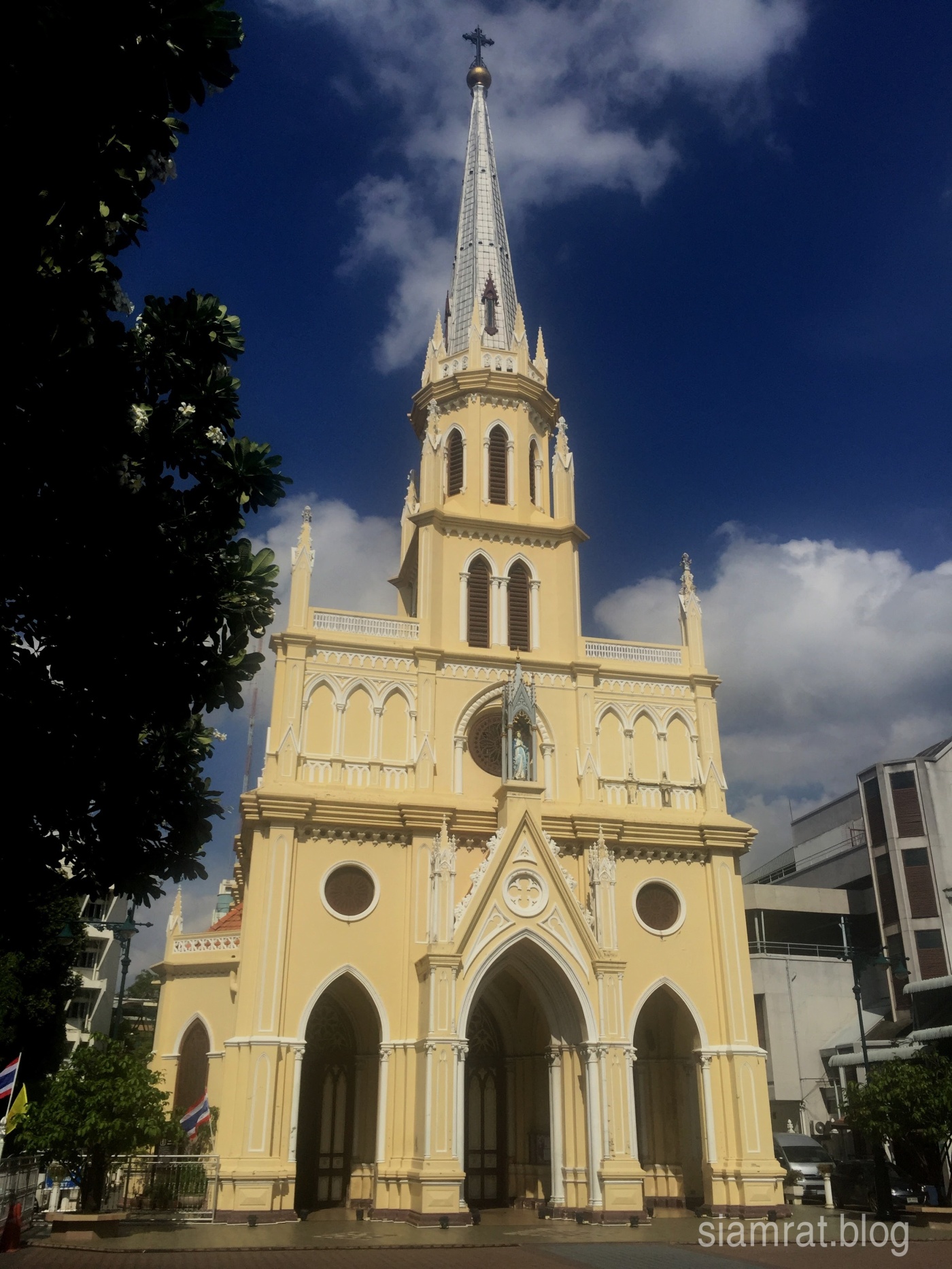 Everybody associates Bangkok with its magnificent Buddhist temples, but along the Chao Phraya River in the heart of Bangkok are a series of beautiful Catholic churches, the oldest of which was built when Ayutthaya was still the Capital city. 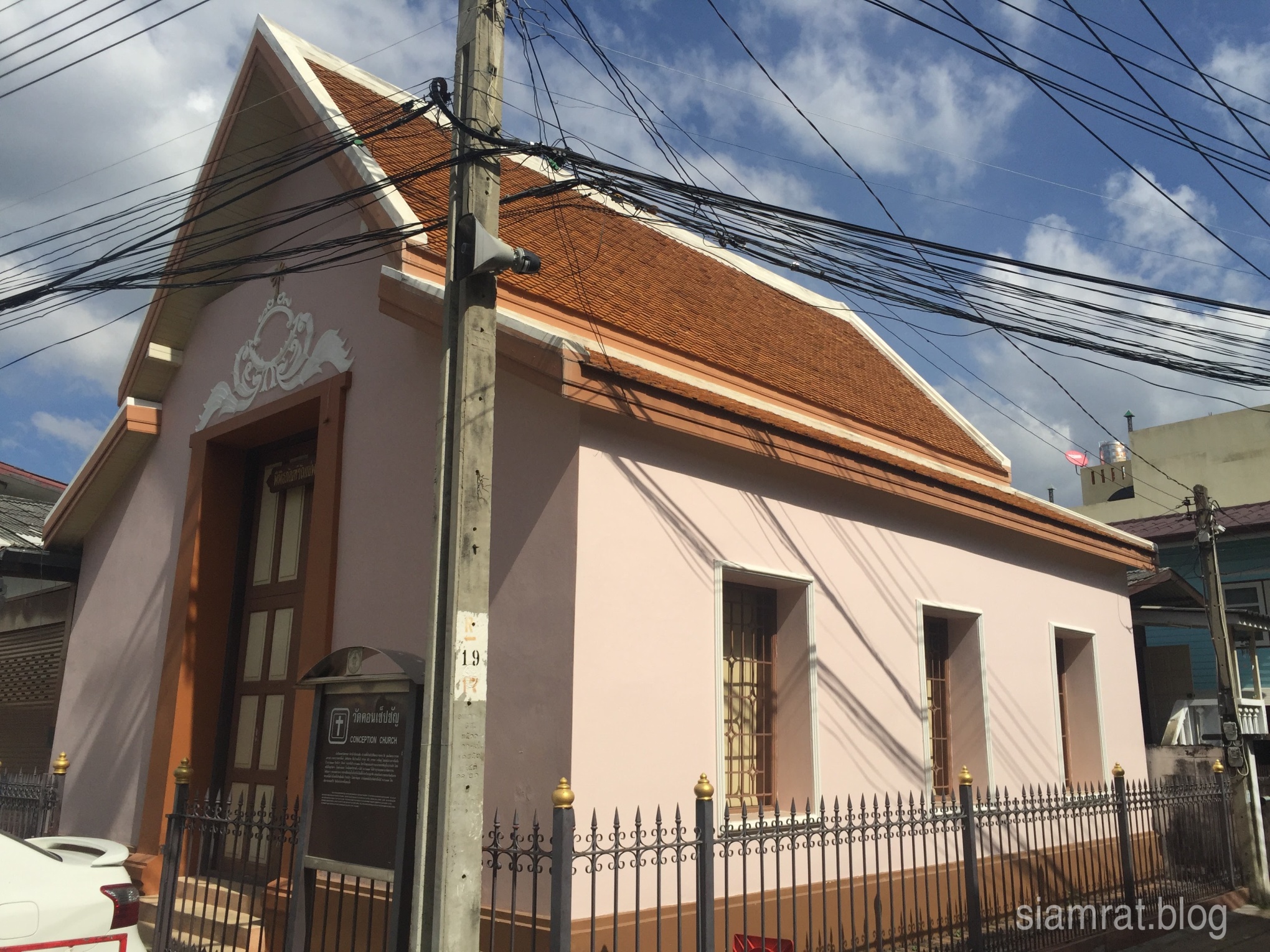 Bangkok’s oldest church predates the founding of Bangkok as the capital city of Siam. The original Conception Church, also called the “Little Church” (“Wat Noi” in Thai), is located behind the much larger and newer Conception Church. The “Little Church” dates back to 1674 when King Narai of Ayutthaya donated the land to Bishop Louis Laneau, a French cleric well known at court (In fact Laneau appears in a picture featured in another of our articles here).

When King Narai donated the piece of land in Bangkok it was inhabited by a few families of non-Siamese Kui people. It appears that these families converted to Christianity and became both the builders and the first congregation of the new church, originally built from bamboo.

In 1785, after Ayutthaya had been destroyed by the Burmese and Bangkok had been established as the new capital, King Phra Puttha Yodfa Chulaloke (Rama I) invited some 500 Portuguese and Khmer soldiers and officials who had assisted Siam in conflicts with Cambodia to settle in the area of Conception Church. From this time the church came to be known as the “Khmer Village Church”.

Whilst the original Conception Church was rebuilt over the centuries it is unclear exactly what year the current brick structure dates from but it is believed to predate the founding of Bangkok. 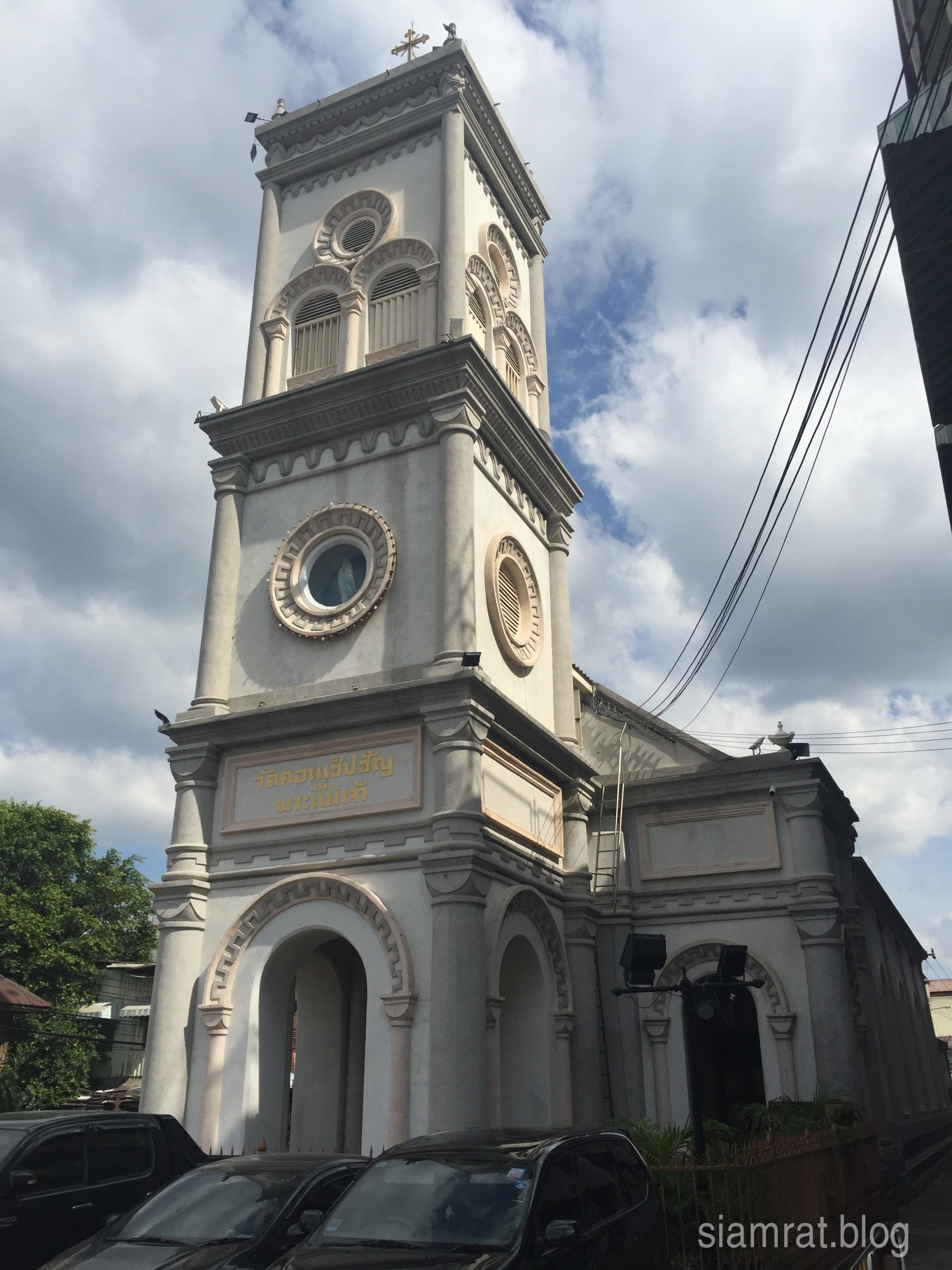 From 1828 the resident priest at Conception Church was Jean-Baptiste Pallegoix, a French cleric. Pallegoix in fact befriended the young Mongkut, the future King Rama IV, who until 1836 was the abbot of the nearby Wat Samorai (Now Wat Ratchathiwat). Pallegoix recognised that the Catholic congregation had outgrown the “Little Church” and in 1837 began construction of a new Conception Church. The church was opened in 1838 and Pallegoix was ordained as a Bishop in June of that year in the church that he had built.

Pallegoix’s original church did not include the bell tower that today stands at the front facing the river. It is likely that originally a wooden bell tower was constructed in front of the church. At some later date this had been replaced by a rather poorly built brick bell tower which collapsed somewhat inauspiciously on Holy Thursday just before Easter 1883. After this disaster the famous Austrian/Italian architect Joachim Grassi who was responsible for some of Bangkok’s grandest buildings, was commissioned to design and build a new bell tower. It is his Neo-Romanesque structure that today graces the front of Conception Church. 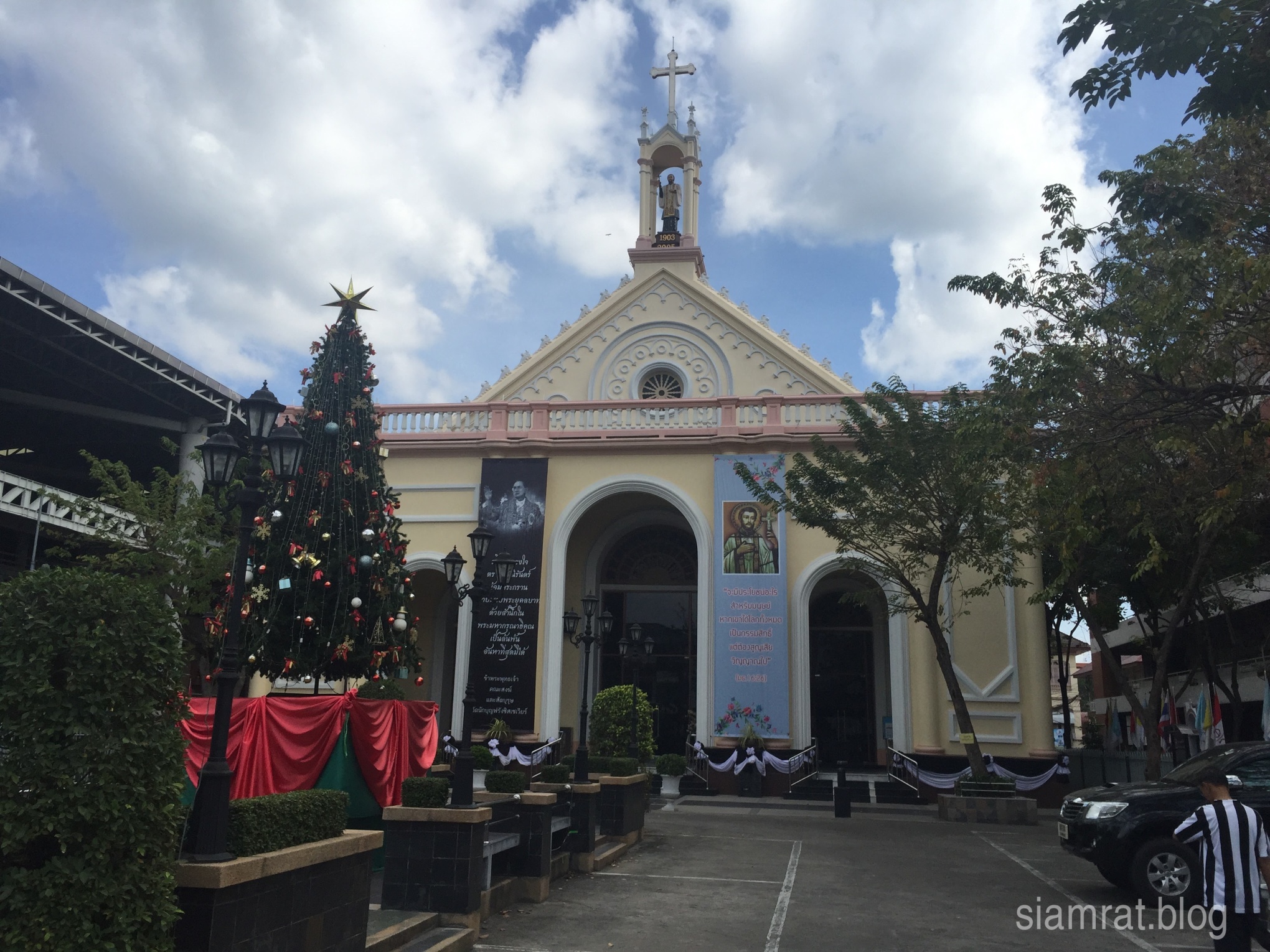 Located just north of Conception Church, the Church of St Francis Xavier was built to serve a community of Vietnamese who had arrived in the early nineteenth century whilst Siam was involved militarily with Cambodia and Vietnam. The first church was built in 1834 and was made of bamboo. Three years later this church was destroyed in a storm and was replaced by a wooden structure.

In 1851 the newly crowned King Mongkut donated a plot of land to his friend Bishop Jean-Baptiste Pallegoix for a new church. The new brick church was to be built in European style and was funded by community donations. The neo-gothic style church took ten years to complete but was finally consecrated in 1867, five years after the death of Bishop Pallegoix. 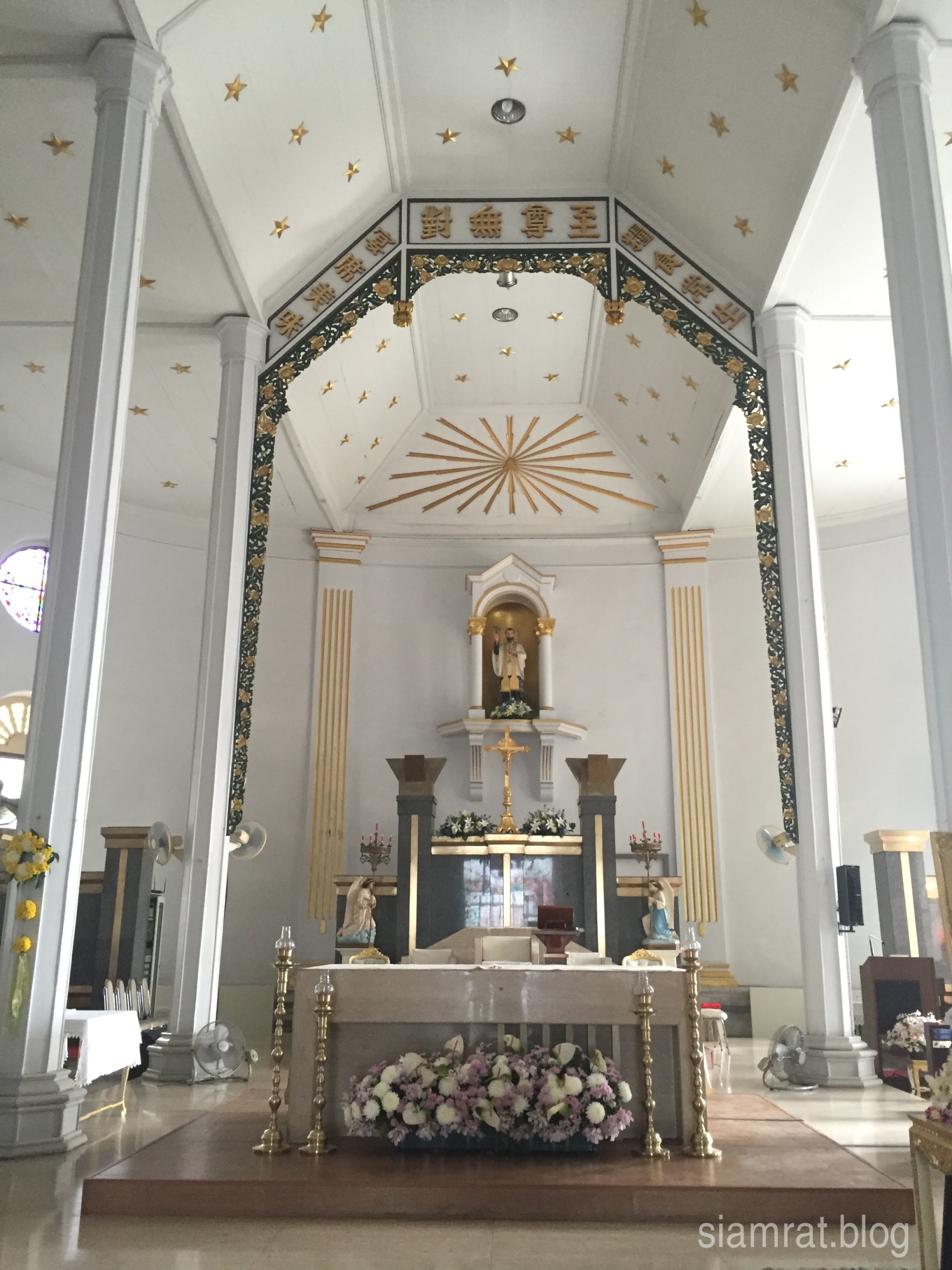 The church commemorates Francis Xavier who was the first Jesuit missionary to travel through India and South East Asia between 1541 and 1552.   It is said that Xavier considered travelling to Siam as a possible route into China but this did not eventuate.

Santa Cruz Church lies on the Thonburi side of the Chao Phraya river.  On 14th September 1769 King Taksin donated a plot of land to the French missionary Father Jacques Corre. This day being the Catholic Feast of the Cross prompted Corre to name the church built on this land Santa Cruz. At this time the Catholic community was predominantly made up of Portuguese settlers and their families. The local community to this day remembers this heritage.

In 1833 fire swept through the Portuguese village and destroyed the church. A second church was built with strong Chinese architectural influences as was popular at that time. It is from this church that the surrounding community became known as “Kudi Jeen” or “Chinese priest house”. 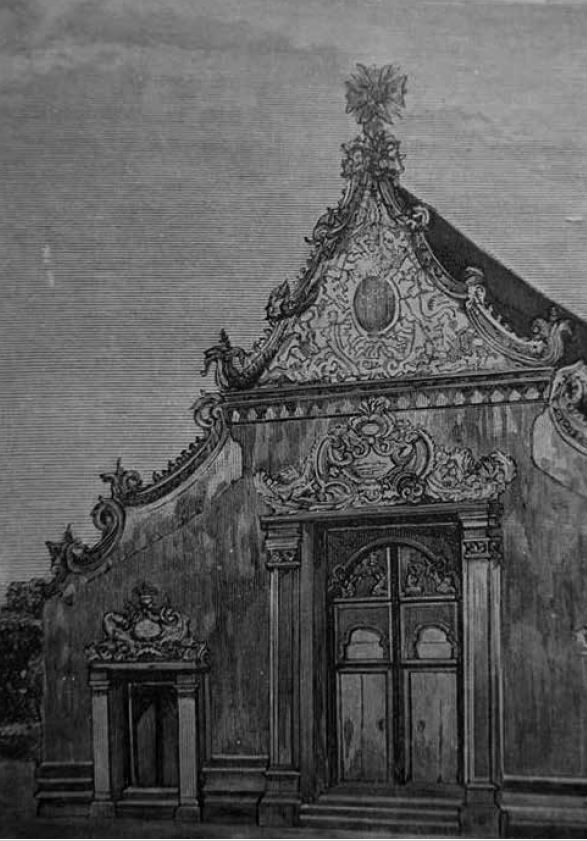 By 1913 the 80 year old church was dilapidated and the resident priest Father Gulielmo Kinh Da Cruz made the decision to build a new church. Construction of the church began that year, built in European Renaissance Revival style, again reflecting architectural fashions of the time. The new Santa Cruz church was completed in 1916 and consecrated on September 17th of that year. 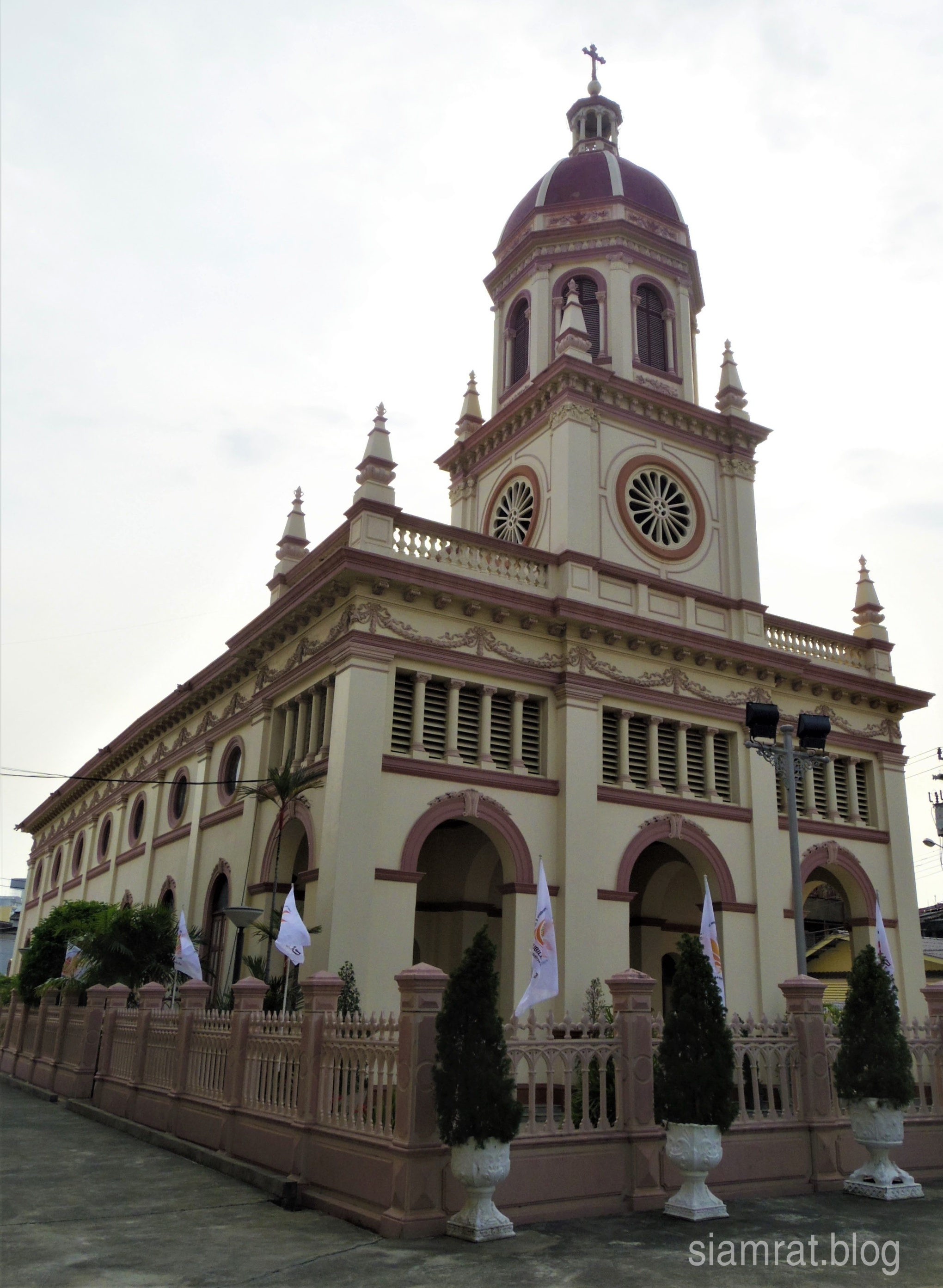 For myself the most beautiful church in Bangkok is the Holy Rosary Church the history of which goes back to around 1769 and the founding of the community around Santa Cruz Church. 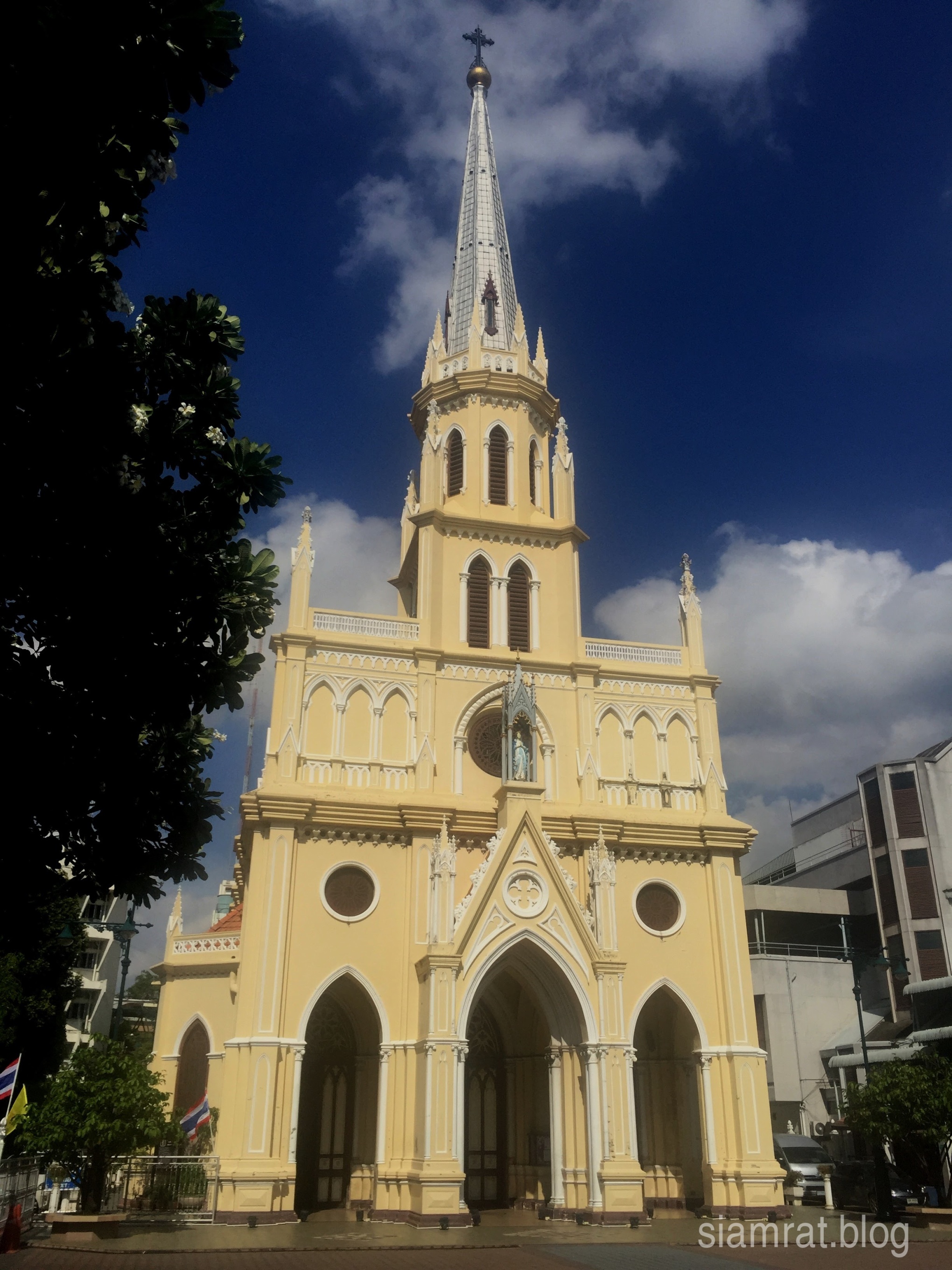 When Father Jacques Corre established the Santa Cruz community in Thonburi, some of the Portuguese refused to accept the authority of the French priest. They established a rival community further down river on the East bank. These people carried with them two revered images, one being Our Lady of the Rosary and the other The Corpse of Christ. When the first wooden church was built in 1787 it was called “Kalawar” from the Portuguese “Calvario”, this name being derived from the second image.

The Portuguese community at this time numbered some 137 people but they had no priests amongst them. So despite their dispute with the French they initially had no choice but to worship at Santa Cruz church and later still relied upon French priests to celebrate mass at their own Holy Rosary church.

In 1839 a new church was built using both brick and wood. In addition a separate brick bell tower was constructed. This church was consecrated by Bishop Jean-Baptiste Pallegoix on 1st October 1839. Being just prior to the Feast of the Holy Rosary led to this church being consecrated as the Holy Rosary church which pleased the community greatly because of their treasured image of Our Lady of the Rosary.

Finally in 1891 Father Desalles began work on the church which exists today. Built in  Gothic-Revivalist  style it utilised modern construction methods being made of reinforced concrete. The church was consecrated in 1897. 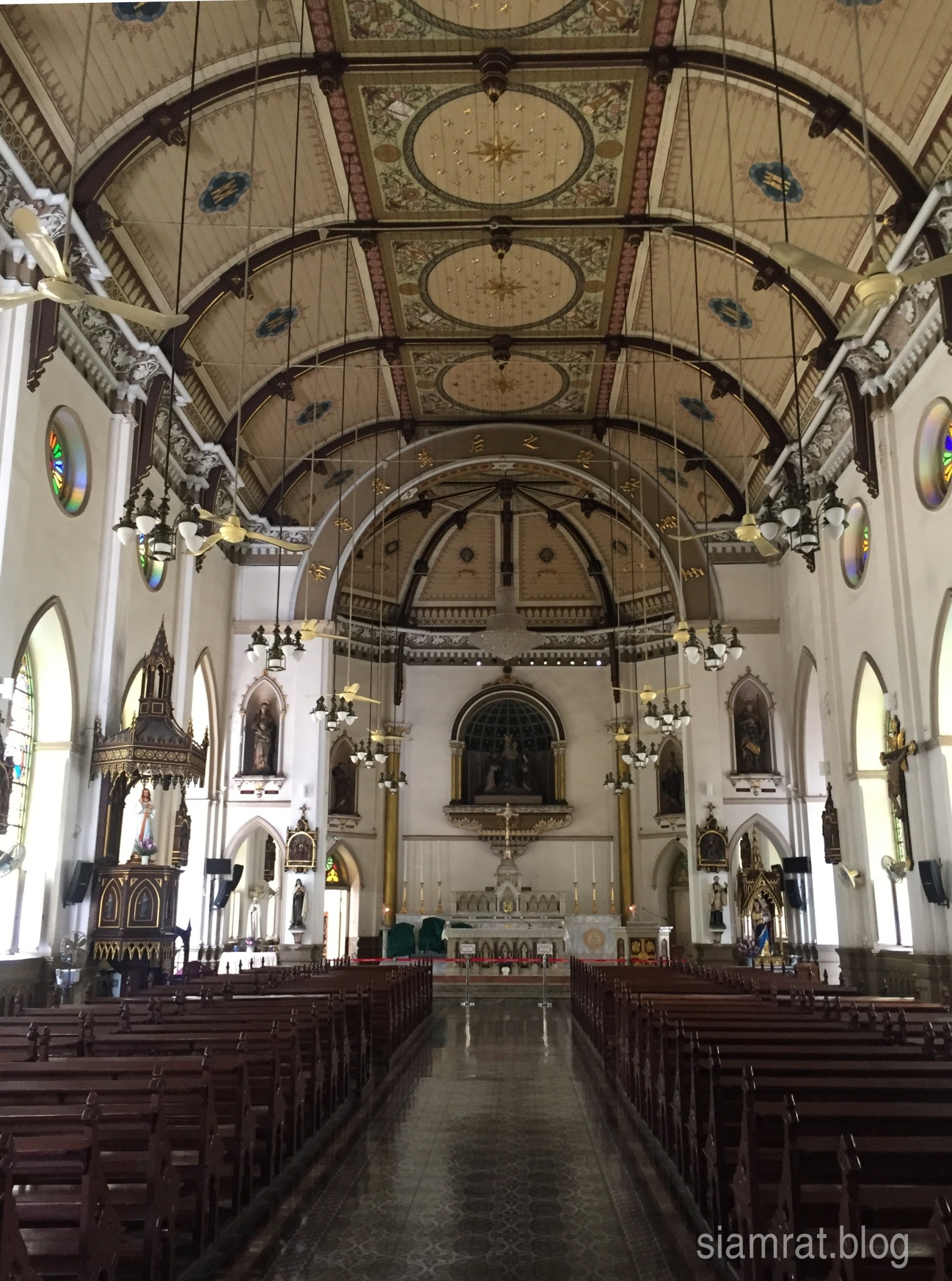 The Holy Rosary Church is notable for having some of the best examples of stained glass windows in Thailand. The two holy images carried by the original Portuguese settlers are still held at the church and each year the Corpse of Christ is carried around the church on Good Friday whilst the image of Our Lady of the Rosary is bought out on October 1st to celebrate the consecration of the church as well as the Feast of the Holy Rosary. 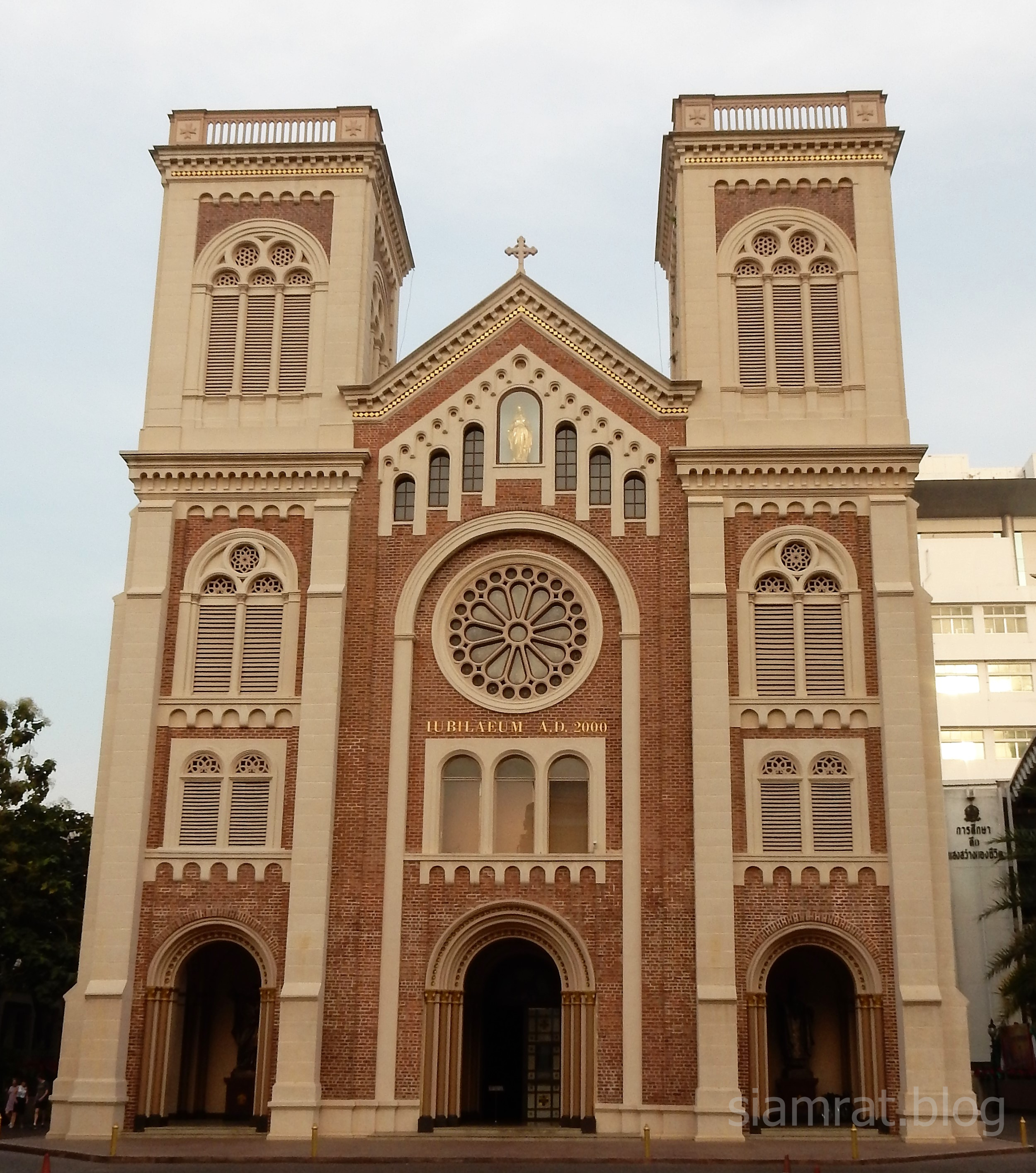 Our final church along the Chao Phraya River is Assumption Cathedral, which is the main church of the Archdiocese of Bangkok. Construction of this church began in 1809 under the direction of Father Pascal and was initially completed in 1822. After its consecration the church became the seat of the Bishop of Siam and the centre of Catholic administration in the country.

As the Catholic community around Assumption grew it was eventually decided to expand the Cathedral. This took place between 1901 and 1919 when the Cathedral was remodelled in Romanesque style. The interior with its striking alternating red arches appears to have been inspired by the famous Mosque–Cathedral of Córdoba in Spain.

In May 1984 Pope John Paul II visited Assumption Cathedral whilst on a brief tour of Thailand, the only time a Pope has visited the country.

4 thoughts on “Churches of Bangkok”