At the mouth of the Chao Phraya River lie two fortresses, Phra Chulachomklao and Phi Seua Samut, where a visitor can see and touch the formidable British guns that were installed in the late nineteenth century to protect the route to Bangkok and learn about the “Paknam Incident” of 1893 when France nearly took over Siam as a colony. 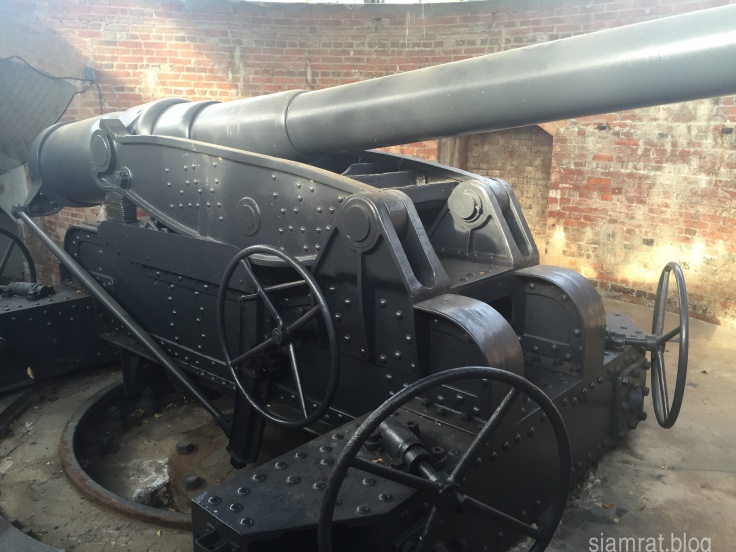 These two fortresses date originally from the early nineteenth century. Phra Chulachomklao Fortress overlooks the mouth of the Chao Phraya river whilst Phi Seua Samut Fortress is located on a small island about seven kilometers up river at Paknam. Modernisation of these defences was begun in the late 1880’s at a time when King Chulalongkorn (Rama V) and his ministers were increasingly worried about the colonial ambitions of the British and French powers which threatened the independence of Siam.

When modernisation was completed in 1893 Phra Chulachomklao and Phi Seua Samut Fortresses were the most modern defensive positions in Siam. Ten guns had been ordered from the British company W.G Armstong, one of the largest armaments suppliers for Britain and its Empire at that time. Three of these guns were installed at Phi Seua Samut and seven at Phra Chulachomklao. These 6-inch B.L. Mark V guns, weighing 5 tons each, were the most modern available and the first breech loaded guns used in Siam. Furthermore they were mounted on the latest “disappearing carriage” which allowed for the gun to be lifted up over the top of its defensive position for firing. On firing, the recoil of the gun would lower it back down out of sight behind the fortress walls where it could be reloaded before being raised again for firing.

Called a “disappearing gun” by the British engineers, the Siamese named these guns much more imaginatively as “Crouching Tiger Guns” and this inspired the emblem design for Phra Chulachomklao fortress. 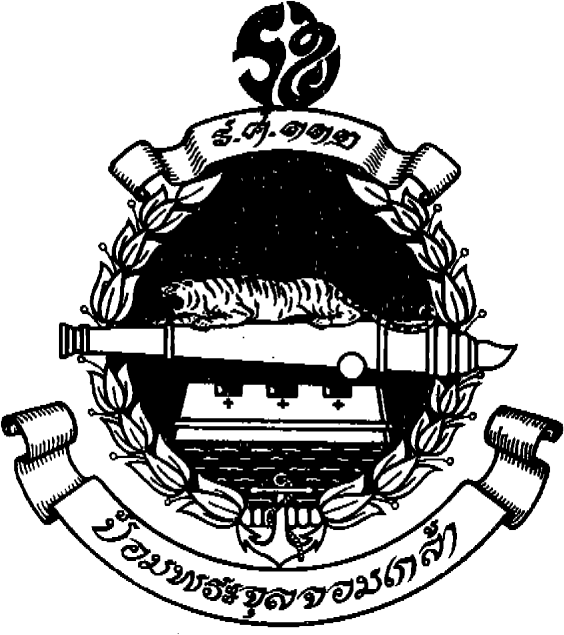 Phra Chulachomklao Fortress was operational by 28th May 1893 when the guns were test fired. Nobody expected them to be used in real battle just two months later but that is what transpired with the events that became known as “The Paknam Incident”.

Tensions between Siam and France had been on the rise for some time and escalated when Auguste Pavie became French Consul in Bangkok and ramped up pressure for Siam to relinquish territory east of the Mekong river to French control. On 10th July 1893 the French announced that two gunships would be sent to Bangkok from Saigon. The Siamese reacted by forbidding these ships to enter the Chao Phraya river thereby contravening a treaty of 1856. The gunship Comete together with the sloop Inconstant arrived at the mouth of the river Chao Phraya on Sunday 13th July. By that time the French government had agreed with the Siamese minister in Paris that the gunships would  hold their position at the mouth of the river pending further negotiations. But the telegram from Paris was delayed and did not reach Bangkok until the 14th. Meanwhile Pavie advised the French Captain Borey that the Siamese intended to prevent by force his passage up river. With entry into the river only possible at high tide that evening Borey was under pressure to decide what to do and so stuck with his original mission and the ships began to proceed up river at 6.30pm.

The Siamese had bolstered their defences by sinking several ships in the river in front of Phra Chulachomklao Fortress as well as mooring barges out from each shore and laying mines and even drums of petrol and dynamite across the mouth of the river. This left only a narrow channel for ships to pass. Two relatively modern Siamese war ships waited on the river, The Coronation and the Makut Ratchkuman, together with two old vessels that were little more than barges equipped with a gun each and a training ship with small cannons for saluting purposes. As the two French warships approached the river entrance led by the small mail steamer  Jean-Baptiste Say, three warning shots were fired from the Phra Chulachomklao Fortress, two blanks followed by a live shell that fell just ahead of the J.B. Say. The French vessels remained on course and the fourth round from the fortress was a signal for the Siamese ships to open fire.  The J.B.Say was hit several times and her Captain grounded her on mud flats on the east bank of the river. But within half an hour the Comete and the Inconstant had broken through the Siamese defences and proceeded upriver. A little while later the gunboats passed the Phi Seua Samut fortress where they again came under fire but apparently sustained no further injury. By 10pm that evening the two ships were anchored off the French Embassy in Bangkok. Fifteen Siamese and two French sailors had been killed in the skirmish.

The failure of the Siamese to stop the French gunboats had serious repercussions for Siam. With their guns in range of the King’s Grand Palace and a blockade in place on the river blocking almost all Siam’s trade, the French were able to dictate terms of a settlement. Siam ceded control of territories east of the Mekong river, territory that forms most of modern day Laos. Military exclusion zones were established 25km from the west bank of the Mekong as well as around Battambang and Siem Reap  which weakened Siamese control of these areas. The French also took temporary control of the Siamese port at Chantaburi and Siam had to pay three million francs indemnity for losses suffered by France. Many in France called for Siam to be annexed as a protectorate as part of French Indochina and it is only a combination of pressure from the British and the fact that the French parliament was about to go to its summer recess that prevented this step from being taken. 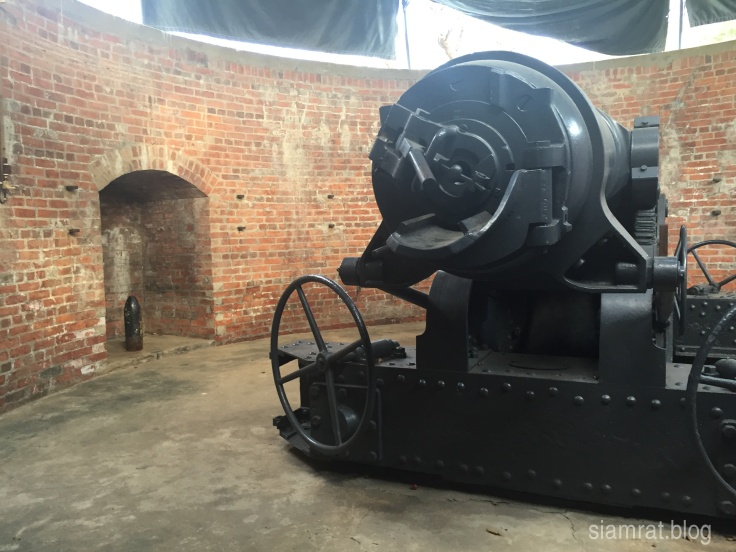 When one sees today the impressive artillery preserved at both Phra Chulachomklao and Phi Seua Samut fortresses the question that one has to ask is, how is it that the Siamese failed to stop the French? To understand this it is informative to refer to contemporary accounts. One particularly useful source is Herbert Warington-Smyth, the British Director of the Department of Mines in Siam, who published a two volume book titled “Five Years in Siam From 1891 to 1896”.

The 13th July 1893 being a Sunday, Warington-Smyth sailed down to Paknam himself to see what was happening. He describes the scene aboard the Siamese gunboat The Coronation thus; “[A] good deal of chaff went on about the coming battle, which nobody expected. Of the whole complement no one had seen a gun fired except the Commander”

Later Warington-Smyth went across to Phi Seua Samut fort where he spoke to the Danish Commander in charge, Louis August du Plessise Richelieu, who described his Siamese men as “good enough, but they had never fired a shot of the big guns, and he hoped they might not until they had had much more training.”

Just a few hours later battle had broken out and the lack of training on the Siamese side proved critical. At least two shots from Phra Chulachomklao Fort did find their mark hitting the Inconstant, but the scene inside the fortress that was later described to him was one of chaos; “The fort was not nearly ready at the time, and, of the three officers there besides himself , only one spoke Siamese………During the action these officers were running breathlessly to their guns in turn up and down half-finished steps and gun-platforms, avoiding pitfalls as best they might, and communicating their orders in languages which none of the astonished gunners understood.”

Meanwhile a similar scene played out aboard the Siamese gunships;
” The ‘Makut’ and the ‘Coronation’ had each an European commander and engineer, and, owing to the total lack of training of the crews, these officers were running alternately to the gun to sight and fire it, and then back to the bridge to steer the ship and telegraph the engine room.”

After firing its second shot the single 70 pound gun of the Coronation broke through the ship’s deck and could no longer be fired. In the ensuing confusion the Coronation very nearly collided with the Inconstant which fired at least two shells directly into the Siamese ship.

Once the gunboats had passed Phra Chulachomklao fortress the next opportunity the Siamese had to stop them was at Phi Suea Samut fortress where the river was considerably narrower. However a similar story unfolded again, as Warington-Smyth describes;
“The inner fort saw practically nothing, for night had set in by the time the two vessels reached Paknam. There was five minutes’ desultory firing of the wildest kind as they passed that point, but the only person who suffered was an old woman in Paknam, who was killed by a Hotchkiss bullet from the ships.”

The Royal Siamese government had spent a considerable sum purchasing the most modern naval artillery for its defences and this together with a belief that Britain would support them against France, a belief bolstered by poor advice from both British and Belgian advisers to the King, appears to have led Chulalongkorn and his ministers to adopt an overly confident attitude with the French which led to a conflict that could probably have been avoided. In the end it appears that lack of training of the raw Siamese naval recruits led to the humiliation of Siam and the loss of territory that is still remembered by modern day Thailand.

Lord Curzon of Britain summarised the whole affair pithily with the comment;
“France has behaved criminally, England weakly and Siam foolishly; and when folly, weakness and crime are in competition, it is the latest named that invariably wins.”

Update
This post was updated 15th August 2019 to correct that the commander at Phi Seua Samut fort on 13th July 1893 was Louis August du Plessise Richelieu, not his more famous elder brother Andreas Richelieu who at that time was Chief Naval Aide to King Chulalongkorn and who would later be promoted to Commander-in-Chief of the Siamese Navy.
(Source – Scandinavians in Siam, Thai Wattana Panich, 1980)

5 thoughts on “The Crouching Tiger Guns of Paknam”