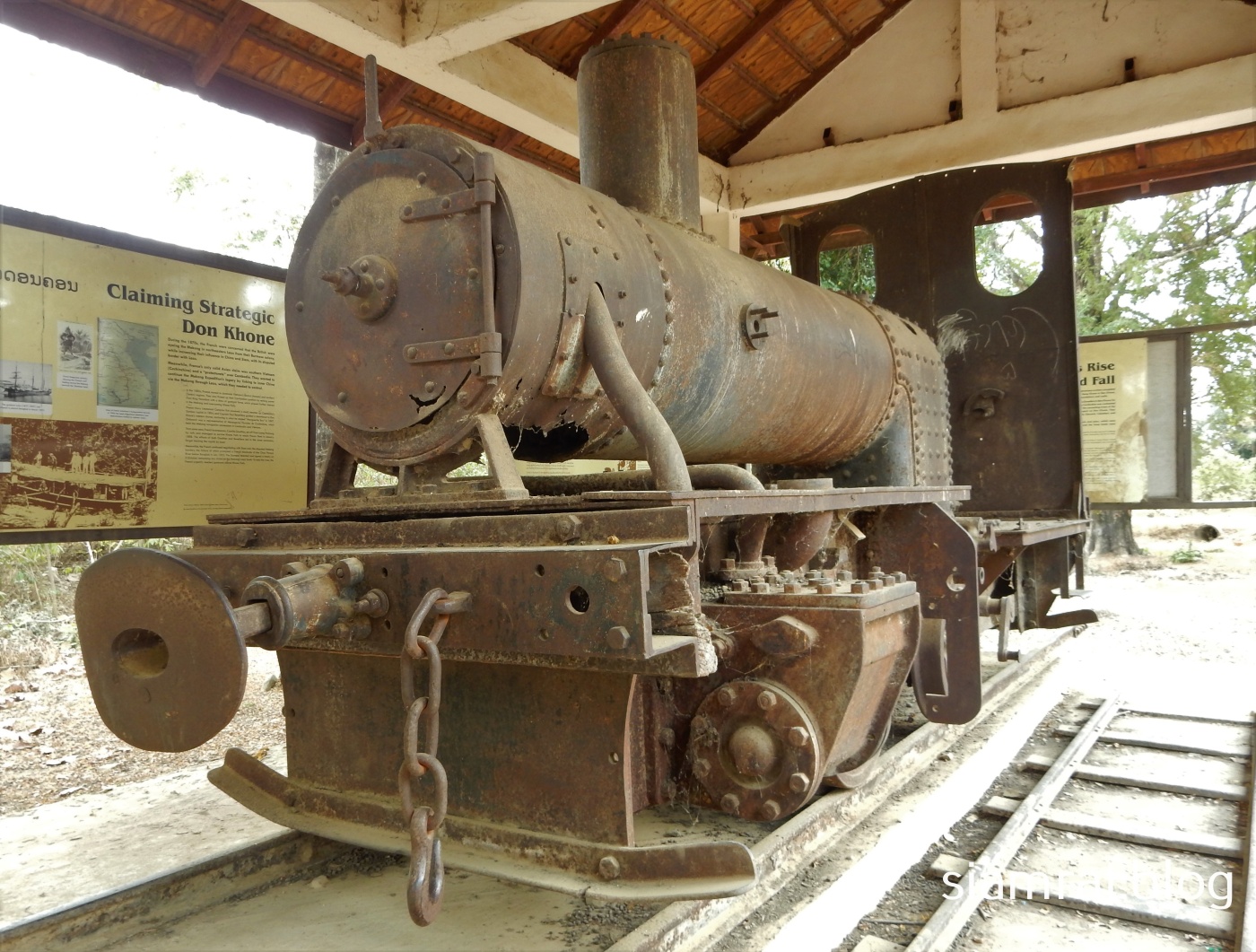 Any visitor to Laos these days does not have to travel far from either Vientiane or Luang Prabang to come across the huge construction sites of the China – Laos Railway that is being built under China’s Belt and Road Initiative to improve trade links between the two countries. But hidden away in the very far south of Laos a small railway engine survives from one hundred years ago to tell the story of similar dreams of linking Laos with its richer neighbours.

The story begins in 1857 when Napoleon III ordered the invasion of Vietnam, resulting in the taking of Saigon four years later. With southern Vietnam in their control the French began to dream that the mighty Mekong River would serve as a rich commercial route into the heart of China.

But very little was known by Europeans about the Mekong River. To rectify this in 1865 the French Minister of the Navy and the Colonies approved an expedition to explore the river, an expedition that had been enthusiastically promoted by Francis Garnier, a naval officer who had been involved in the military action at Saigon. The Mekong River Expedition under the command of Captain Doudart de Lagrée and with Francis Garnier as second-in-command, departed from Saigon with two steam powered gunboats on 5th June 1866.

The team stopped first in Cambodia where they spent a week surveying the temples of Angkor that had been famously “re-discovered” by Henri Mouhot just six years earlier. They then headed back to the main river and started the journey north up the river, now by canoe. They soon hit the first of the rapids for which the Mekong is today well known. It took the team five days to painfully push their boats up through the surging waters of the Sambor rapids to reach Stung Treng. There the expedition was delayed by sickness for some three weeks before venturing further north into the Khone Falls.

The Khone Falls are a spectacular sight. Over a 10km length of the river the series of falls, some up to 21 metres in height, are separated by innumerable small islands that give rise to the area’s local name Si Pan Don or “Four Thousand Islands”. At the height of the wet season, pretty much when the expedition arrived in August of 1866, the river here is nearly 11km wide and discharging perhaps 49,000 cubic metres of water per second. Only after a month of torturous effort did the team reach calm waters and the town of Champasak, by which time it was clear to Lagrée and Garnier that the dream of easy commercial navigation to China via the Mekong River was over.

Gunboats on the Mekong

But in fact the dream did not die. In the following years as enthusiasm in France increased for the colonialist Mission Civilisatrice more pioneers emerged to demonstrate the dominance of modern civilisation over both natives and nature. In 1887 Captain Réveillère succeeded, with the aid of some rock blasting, in navigating a steam-powered boat through the Sambor rapids and up to Khone Falls. Then in October 1890 Ensign Guissez began an attempt to take a small gunboat up through the Khone Falls themselves. His attempts continued each wet season for the next two years but ultimately ended in failure.

But in July 1893, over on the Chao Phraya river at Bangkok, momentous events were unfolding. Driven by the France’s colonial ambitions around the Mekong territories, tensions with Siam reached a climax. French gunboats steamed up the Chao Phraya and forced Siam at gun point to relinquish any claims to territory east of the central Mekong river. A treaty was signed that pretty much created the territory of modern Laos (Read Siamrat’s previous article about these events here).

For the French this created an immediate problem of how to exert control over its newly gained territory. In this era of gunboat diplomacy the answer was clearly to get gunboats onto the central stretch of the Mekong River. By September 1893 Lieutenant Georges Simon had arrived at the foot of Khone Falls in charge of two specially built gunboats. In order to bypass a large stretch of the rapids Lt. Simon had a railway built across Don Khon Island and prepared to transport his gunboats by rail carriage for 3km. But whilst one of the boats was being loaded it was hit by a tree floating down the river causing the carriage to derail. By the time the carriage had been repaired the water level had dropped and Simon had to rebuild his railway further to the south eastern tip of the island.

Having redirected his railway to the south of the island Lt. Simon found that the 3km of track he had planned for was insufficient and when the boats were eventually transported across the island, tracks had to be lifted from behind and installed in the front to make up the 5km distance. The work was exhausting and many of his Vietnamese workers died from the poor conditions or ran away. But by November 1893 Lt. Simon had gunboats on the Mekong river above Khone Falls and pompously named himself “Chief of the Upper Mekong Hydrographic Mission”.

Lt. Simon’s success using a railway across Don Khon Island spurred new dreams of easy transportation between Saigon, Vientiane and Luang Prabang within French Indochina. Three 60 ton steam boats were ordered in 1896 for postal services, which necessitated upgrades to the original rail tracks and piers. A year later the first steam locomotive was ordered, named after the then Governor-General of Indochina Paul Doumer (Later to become French President and be assassinated in 1932).

For passengers in those early days there were few comforts. Marthe Bassenne described in her book In Laos and Siam (1912) of her 1909 visit and the chaos as tourists, locals and freight were all jammed together in open wagons with the small locomotive straining under the load. At the North Khon Island Station they transferred onto a small vessel which then transported them through the remaining channels of the falls before they could switch to a larger boat for the journey up to Vientiane.

In 1910 the railway was extended north onto neighbouring Don Det Island by way of a magnificent 13-arch 158 metre long reinforced concrete bridge. More locomotives were also ordered to service the increased movement of goods and people. On the north western side of Don Det Island the concrete infrastructure of the old French port can still be seen today.

But in the end the boat and rail venture failed to make sufficient money. In the dry season the load capacity of boats was restricted whilst in the wet season services were frequently disrupted by the still impassable rapids. In 1920 a 22km stretch of road was built around the falls which in 1937 was integrated into Colonial Route 13 connecting Saigon with Vientiane and Luang Prabang. The rise of motor transport made the arduous river transport redundant.

The Japanese used the little railway on Don Khon Island briefly during the Second World War to move supplies but after that it fell into disuse. The following decades saw Laos suffering from war and severe economic hardship and the railway was forgotten.

In 1990 Jean-Michel Strobino, a French government official with a keen interest in Indochinese history, was exploring Southern Laos and by chance came across two locomotives buried deep in vegetation at the location of the old North Khon Island station.

With some local helpers Strobino cut away the jungle to reveal these locomotives for the first time in 50 years. Living nearby he also found a 79 year old man who had spent 22 years as one of the last train drivers. Today one of the locomotives stands under a small pavilion together with some displays prepared with Strobino’s assistance explaining the engine’s history.

Other clues to this lost history of Don Khon Island stand around some of the local houses. On close inspection one notices that several of the fences in the area are in fact made from sections of the old narrow-gauge railway line.

And so whilst in the north huge construction sites mark a new railway through Laos, here in the south a trickle of tourists come by and briefly admire a little railway engine lost from another era that tried to fulfill similar dreams of opening up the country to trade.

The remaining railway engine is on display at the north side of Don Khon Island, just a short walk inland from the railway bridge crossing to Don Det Island.

The Four Thousand Islands area of the Khone Falls can be easily explored using the city of Pakse as a jumping off point, being situated on the Mekong 100km north of the Khone Falls. Daily mini-buses or flights connect Pakse with Vientiane or one can travel by mini-bus from Ubon Ratchathani, Thailand, in about 3 hours via the Chong Mek – Vang Tao border crossing. From Pakse buses or mini-buses are available for the journey down Route 13 to the falls.

The best time of year to visit is between November and February when both rainfall and temperatures are at a minimum (Although you will miss the falls at their most daunting wet season peak).

The islands these days attract a small but steady stream of tourists. Guesthouse accommodation is available on both Don Khon and Don Det Islands and bicycles which are easy to hire make a pleasant way to explore. For the more adventurous one can even go zip-lining across the falls which provides spectacular views of the obstacles faced by the early French explorers.

4 thoughts on “The Little Lost Train of Laos”